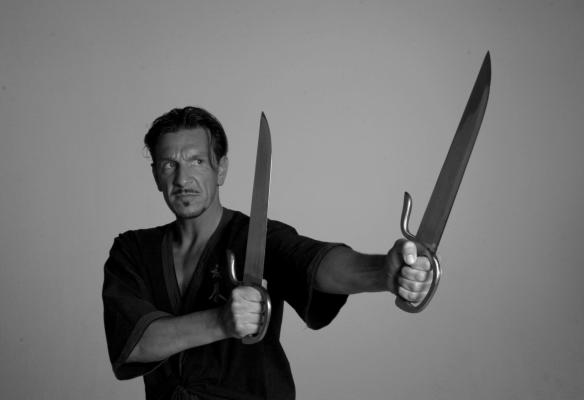 “Everyone talks about it, that the weapons of WingChun would improve the system, but why did no one do it?”
— Sifu Klaus Brand

In popular conception, “wing chun” invokes several mental images. Besides the so-called wooden dummy, it is the iconic weapons. Nearly all lineages of wing chun impart them as the most advanced forms in their teachings.

My teacher, Sifu Klaus Brand, once posed an interesting thought experiment. If we reversed the Form curriculum and taught the lowly Bat Zam Dou first, students would fantasize about the sublime Siu Nim Tau (Small Intention). There is a human inclination to want what we don’t have. A manifestation of this is falsely overvaluing the latter. This is particularly true of highly guarded “secrets” like the knife and pole Form. I smile while remembering him refer to these misplaced beliefs as obscure “esoterrorism” versus genuine esotericism. Sifu Brand rectified this cognitive bias with a provocative but compelling decision.

How? He eliminated the final two Forms! We have no WingChun weapons. This would be a considerable sacrilege in any other Chinese wing chun lineage. But much as Bruce Lee strongly advocated surpassing the “classical mess” half a century ago, Sifu Brand dared to definitively do so.

“Too much horsing around with unrealistic stances and classic forms and rituals is just too artificial and mechanical, and doesn’t really prepare the student for actual combat. A guy could get clobbered while getting into this classical mess. Classical methods like these, which I consider a form of paralysis, only solidify and constrain what was once fluid. Their practitioners are merely blindly rehearsing routines and stunts that will lead nowhere.”
— Bruce Lee

I believe this critique of Bruce Lee was quite perceptive, but he went too far by categorically dismissing Form training. His philosophy of “Jeet Kune Do rejects all restrictions imposed by form and formality”. But as a methodology and pedagogy, it is abstruse and abstract. Who, especially beginners, can learn with a transcendent standard of formlessness? And so his students, grand-students and great-grand-students, try their best to find a way with no path. In other words and in the IAW, Form is Function, no more nor less. Like vocabulary is to conversation, Forms are a valuable bridge between solo practice and partner interaction. They systematically ingrain indispensable physical coordination patterns. For us, these precisely choreographed sequences are valid, but only those with direct applicability to modern Self-Defense. Obsolete, including weapon, forms that don’t fulfill this stipulation can be safely abandoned.

To date, Sifu Brand has resolved countless intractable doubts and persistent misconceptions with piercing ingenuity, not the least of which is the common myth of “wing chun weapons”. For instance, the IAW Tan Sao (Spreading Arm) of our 1st Student Level — as well as the Bong Sao (Winging Arm) of our 2nd — is a Bat Zam Dou motion hidden in plain sight. One of the first movements in our system is one of the last in other styles! Moreover, the Lok Dim Buen Gwun mechanics have powerfully influenced our unique footwork and body dynamics.

Hence, Sifu Brand has obviated the need to long for, let alone train, the archaic wing chun weapons. Often these pieces of metal and wood are dangled before unwitting students to someday save them from unarmed mediocrity, but only if they are deemed worthy. This is the unfair ruse of certain gurus to create and perpetuate insecurity. My teaching colleagues in the IAW abhor such chicanery. Our first and foremost purpose from day one onwards is to build self-assurance in our pupils. No, not as a lovely ideal prescribed via positive talk, but as a sovereign faculty incorporated (literally “put into the body”) through the felt sense of sober training. This honest fidelity to the impact of reality is not always comfortable but necessary to come alive. Dreams keep us asleep, at least nightmares awaken us!

“As students they learn what someone taught them and they believe in everything. It is primarily not the students fault. Some are indeed following ignorant founders and instructors who are unable to think independently. That’s the crux of the matter. Many, however, have found their way, even if it appears to us as totally absurd.”
— Sifu Klaus Brand

Imagine zealous students kneeling before their wing chun sifu following fifteen loyal years of myopic devotion. They nervously adjust their silk sashes. Finally, these chosen ones shall be initiated into the mysteries of the double knives and long pole. More importantly, all their deepest questions and lingering fears about the actual practicality of what they learned prior will soon be dispelled. Or so they pray. Then their sifu taps one shoulder with the knives and the other with the pole. Some incense is lit and some tea is sipped. With eagerness they swing these exotic weapons around for the next five years, but afterwards still feel unable to defend themselves — with or without weapons. They muster up the courage to ask their sifu why. Shaking his head, he says because they’re not ready for the super secretive triple knives and longer pole forms yet! And so the prank carries on…

If you cannot successfully apply basic techniques with robust confidence, either you are lazy or unlucky. In any case, collecting another form or two will not help. Anticipating future knowledge, not to mention getting lost in the misty past, prevents present knowing. Tangible skill depends on finding an experienced teacher of a functional system, which you train continuously, diligently and frequently.

Granted, weapon actions have upgraded our weaponless system. That process, initiated well over a decade ago by Sifu Brand, is already done. Being a traditionalist, albeit an innovative one, he did not remove them nonchalantly. They have been painstakingly subsumed into your limbs and body, muscles and bones, here and now, rather than sold separately as a mere knife and pole. You are the weapon. The best inventions synergize simplicity and function, often prompting those who appreciate such elegance after the fact to exclaim, “Why didn’t I think of that!” Conversely, those who don’t apprehend or accept it merely question or argue ad infinitum. This is a kind of magical thinking, prevalent in our virtual age of anonymous amateurs and laptop warriors expressing vehement, albeit uninformed, opinions. Then there are those entrenched in the status quo, unable to wrench their creativity free from a mire of presumptions.

Alas, this is the case with art and science alike. There is one vital caveat. Whereas in dance and fashion or even psychology and linguistics, tastes and theories can vary arbitrarily with no ultimate detriment, wrong-minded Self-Defense may have injurious or lethal consequences. The nonverbal immediacy of asocial violence severely restricts our technical choices. Thus, IAW WingChun is shaped.

“My system is the undeviating application of the entire knowledge in every single Program. Already at the Basic Levels we offer to train applications of all Forms. Many students from other styles rather wait 15 years before they learn the weapons (with the hope it would help somehow).”
— Sifu Klaus Brand

Note, for viable weapons training, we offer IAW Escrima with which the double knives and long pole may be utilized in combat. However, that is another discussion.

2 thoughts on “You Are the Weapon”