To give another perspective on what it’s like to visit the IAW in Germany, I asked Chris Bobek to report on his experience at the HQ in Bruchsal and nearby Academies. It was great to see him enjoy himself and represent the IAW-US to all the instructors and students there. Perhaps some of you will accompany us in the future.

Here he is, in his own words recounting day-by-day events:

I really enjoyed the nine days I spent in Germany.

Sihing Paul, Sihing Gerald, and I attended some training events with Sifu Klaus on the first Saturday and Sunday after we arrived. We did five hours on Saturday and seven hours on Sunday.

Saturday was great because the event was only open to PPL and above. However, Sifu Klaus allowed me to attend since they were focusing on the 1st section. So, I was the lowest ranking person at the event (9thSL), but I was training with Sifu Ed (visiting from the IAW-UK along with Sifu Tony) and Sihing Alex Hammer (PPL) who heads one of the Karlsruhe Working Groups.

First day of the 2009 IAW Event for advanced aspirants.

Second day of the IAW Event 2009 for all students.

On Tuesday, I attended the 7:30-9:00 pm class at Sifu Klaus’ Academy in Bruchsal. Sihing Tobias, one of Sifu Klaus’ private students, ordinarily teaches the Tuesday and Thursday night classes at the IAW-HQ. As we were getting ready to start the class, Sihing Paul mentioned that Sifu Klaus decided to teach that night — something that doesn’t happen that often! So that was a really nice and unexpected bonus.

A view of the IAW Headquarters in Bruchsal.

On Wednesday, I had intended to train with Sihing Alex again in Karlsruhe, but Sifu Klaus thought it would be nice if I attended a class at the Academy of WingChun Mannheim with Sihing Marc Brandt and Sije Nina. He called Sihing Marc and told him to expect me. Sihing Marc is fantastic and really just the nicest person you’ll ever meet.

Entrance to the Academy of WingChun Mannheim.

Thursday, I attended Sihing Tobias’ class at the IAW-HQ. By the way, Sihing Tobias is going to be vacationing in San Francisco for a few days during October. I hope we have a chance to have dinner with him or at least meet him for a drink while he’s here. I like that guy — he’s cool.

I must say, the Maps application on the iPhone 3GS (with the new compass feature), made getting around and locating the Academies in Karlsruhe and Mannheim too easy. With no skyscrapers in Bruchsal, Karlsruhe, or Mannheim, the 3GS was insanely accurate since there was always a clear line-of-sight. I bookmarked the addresses of the Academies I visited. If you ever find yourself in Germany and you feel like dropping in on a WingChun class, just text or e-mail me (from wherever you are) and I’ll send you the contacts immediately.

Sifu Klaus really appreciates it when people come out to visit him. He saved me a ton of money by hooking me up with some great and very affordable accommodations that you’d never find on Priceline or Yahoo! Travel. After training we would go out and drink beer and have dinner. It was nice to spend so much time with Sifu Klaus, Manola (Sifu’s girlfriend), Sifu Alex, Sifu Ed, Sifu Tony, Sihing Paul, Sihing Gerald, and Sihing Alex Hammer. I’m looking forward to going back next year — if not sooner! 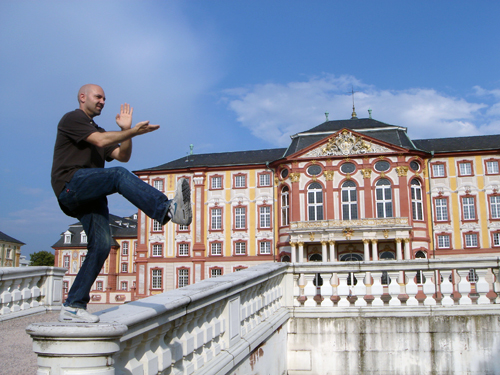 Chris in happy balance at the Bruchsal Palace.

Thanks for sharing, Chris!